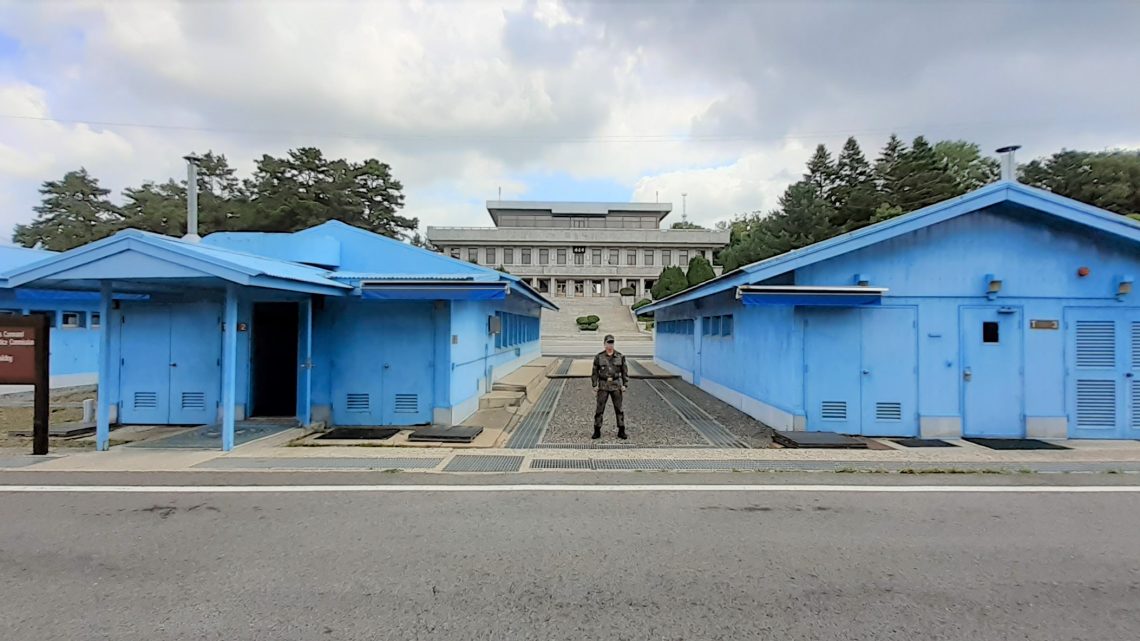 It was literally a SECRET trip. The English-speaking Korean guide for our tour group told us, “We are going on our tour today. But, officially, we are not going. So you can not tell anyone that we are going.” She added that all DMZ tours for the day organised by other travel companies were cancelled with no specific reasons given.

In fact, we initially booked our tour for another date but it got cancelled and we were given some vague reasons. So we had to frantically find other available spots and put our names on the waiting list for other multiple dates. After being shuffled around a few times with very slim certainty of what’s going to happen with our tour, we got the final confirmation only two days before the actual tour date. As part of the group of 30 lucky travelers, we were finally allowed to embark on our secret trip to the Joint Security Area (JSA), aka Panmunjom.

The JSA is located inside the Demilitarized Zone (DMZ), which is the 4 km wide band of area across the Korean Peninsula buffering the two Koreas. Ironically, however, the DMZ is the most heavily militarized zone in Korea, if it is not in the world. Historically, the JSA is where the Korean Armistice Agreement was signed in 1953 after three years of the Korean war. In more recent times, this is the very place where South Korean President Moon Jae-in and North Korean leader Kim Jong-un shook hands at the inter-Korean border before their historic talks in 2018 and US President Trump and North Korean leader Kim had a surprise meeting as recent as June 2019.

Interestingly enough, we were told that at the JSA, the North and the South are still using a conventional way of communication: shouting at each other. If South Korea has something to say to North Korea, the South will shout to the North Side. Then someone from the North will come out of their building, record the audio of everything said and convey it to Pyongyang (North Korean capital).

When I (Eve) saw the news about the latest surprise meeting between US President Trump and North Korean Leader Kim, I was wondering whether Kim was following Trump’s tweets. But now I can imagine one possible scenario as to how the meeting had eventuated: South Korea with super fast internet service saw the Trump’s tweet first and shouted to the North Korean solders at the JSA, “President Trump wants to see your leader Kim to say ‘Hi!’. Go and ask him whether he wants to come down to Panmunjom (JSA) tomorrow.”

The JSA was closed to the public since October 2018 to April 2019 to remove military equipment and fences after a more friendly atmosphere was created between the North and the South in recent years. When we visited Panmunjom in July 2019 soon after it was reopened, we could enjoy significantly relaxed rules, such as longer time to tour the JSA than previously allowed and taking photos of pretty much everything with very little restrictions. But our guide reminded us that the current friendly atmosphere could change any time along with the relaxed rules in the area.

In order to travel inside the DMZ, we had to go through couple of security checkpoints, where a pair of young South Korean soldiers came on board our tour bus to check our passport and verify the number of passengers with their record. Foreign passport holders are required to provide a copy of their passport at the time of booking for security clearance and carry their original passport with them on the day of tour. Foreign passport holders can make bookings for DMZ tours through half dozen travel agencies approved by the South Korean government. There are multiple different packages for DMZ tours available. However, we recommend to make sure the JSA (Panmunjom) tour to be included in the program. For more detailed information on DMZ tours including bookings, required documents, available tour dates and prices, please go to following links.

Our DMZ tour was executed with military precision. The guide warned us that if we didn’t return to our bus on the designated time, the bus would still leave on time without waiting for us. Nobody wanted to be left alone in the DMZ, so everyone followed the guide’s instructions obediently and the tour ran like a clockwork.

Apart from the JSA, our DMZ tour included a visit to the Third Infiltration Tunnel made by North Korea, the Dora Observatory where North Korea can be seen in the distance, the Dorasan Station recently opened for the railway line reconnecting the North and the South, the Imjingak Tourist Area where artifacts and monuments from the Korean war are exhibited and lunch at the Unification village.

I was afraid that the almost eight hour DMZ tour might be too long and boring since I have seen the places in the media numerous times already. But I have found that seeing them on TV is one thing and seeing them with my own eyes is another. Besides, civilian and military guides gave us a different dimension to the places and we got to hear interesting background and behind the curtain stories about some of more recent historic events and developments. The DMZ tour, especially the JSA or Panmunjom tour, is highly recommended to anyone who is curious to know more about Korea.