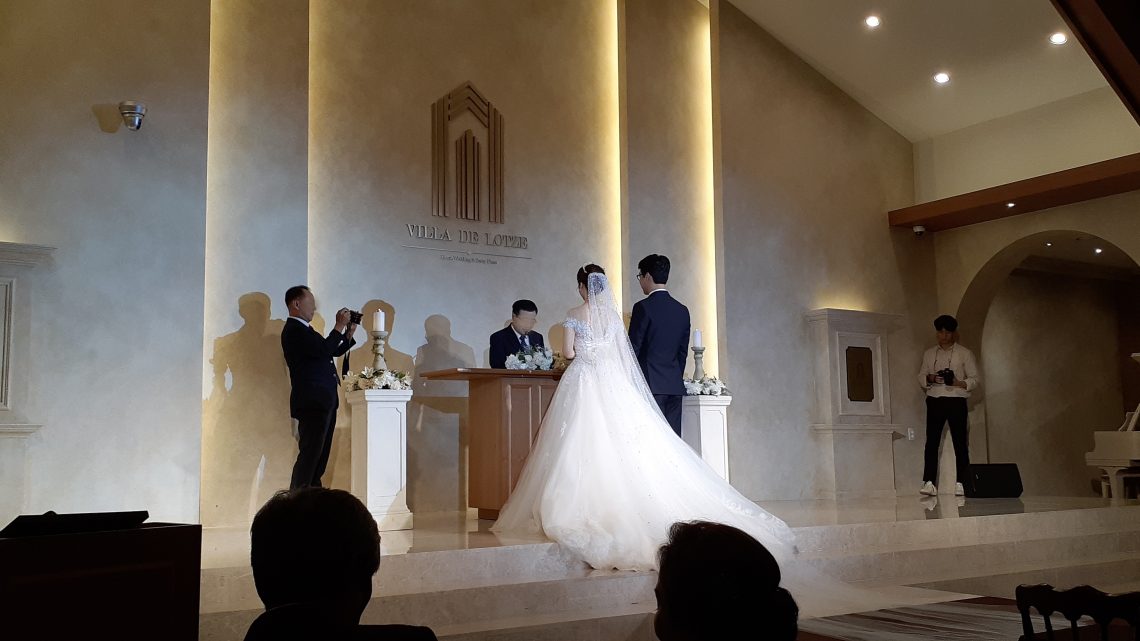 This time, I didn’t travel to Korea for a romantic holiday with Adam. Instead, I was obliged to witness someone else’s romantic relationship sealed in an official ceremony: a wedding. When I told my friends and colleagues the purpose of my trip to Korea, many of them asked me, “what are Korean weddings like?”

Well, it is hard to answer in a few words as it is vastly different depending on the individual family and their financial situation. However, after having attended number of weddings in Australia and Korea as well as my own two weddings in Sydney (to the same man, a civil wedding and a religious one a few years apart), I can say that modern Korean weddings are in general simple, short and pragmatic compared to Australian weddings.

In Korea, the bride and groom typically take their wedding photos several weeks before their actual wedding date, the style of which ranges from studio photos to elaborate outdoor scenes.

Weddings are normally held at purpose-built wedding halls and largely consist of two parts. The first and main part is a modern western style ceremony which lasts for about half an hour where the bride typically wears a white wedding dress (almost always hired not bought) and the groom a suit. The wedding guests will arrive at the wedding hall, where they present their gift of money in an envelope at the table set outside of the hall for this purpose and attend the main wedding ceremony. Immediately after the ceremony, they all go to a designated restaurant for guests, have lunch and leave. Nice and simple but business like.

In the second part, taking place immediately after the main wedding ceremony, the newly-wed couple change into Korean traditional costumes and formerly greet the groom’s parents and their close extended family members by bowing to them in the traditional way at an exclusive family room next to the main wedding hall. At this traditional greeting, called Pyebaek, the groom’s family members wish the newly-wed many children and throw chestnuts and dried jujube fruits, representing offspring, for the couple to catch with bride’s broad wedding dress. After these two parts of wedding ceremony, the bride and groom will greet some guests and then leave for their honeymoon. So no lengthy evening wedding receptions.

The wedding ceremony I have recently attended was not far from typical Korean weddings described above. But the bride and  groom in their early 30s decided to bring about slight changes and add personal touches to their wedding. At a typical Korean wedding, a guest speaker is invited to give a speech. A guest speaker is normally chosen by the bride and groom among people they respect but don’t have family ties with such as university professors, and also functions as the celebrant. So almost always the guest speaker is a complete stranger to both families and guests. With a view that this kind of a perfunctory guest speaker is unnecessary, my darling bride and groom asked both of their fathers to deliver their congratulatory messages instead of a guest speaker. NICE!!!

Also, the bride and groom themselves read their wedding vows together
without a wedding celebrant. Even more, the groom sang a love song for his bride before all the guests. (To be honest, the groom was not a good singer but deserved an applause for his bravery and sweetness). Overall, their wedding ceremony was like a wedding and a mini wedding reception combined into one. For the second part of the ceremony, the bride and groom in traditional Korean costumes greeted the groom’s parents as well as the bride’s parents who were traditionally excluded from the traditional greeting ceremony. Nice again!!! Overall, their wedding was moving, beautiful and sweet.

Up until now, I have thought Korean weddings are not as romantic as western style weddings. But I have realized what makes a wedding romantic is not the way a ceremony is conducted but how much love the bride and groom have for each other, as their sweetness, passion and the strength of their love for each other permeates through the air for everyone to feel. I have concluded that love makes all forms of wedding just as romantic.

By the way, there is another type of weddings quite popular in Korea, that is the Korean traditional wedding. But that is for another blog. Probably after having my third wedding to Adam……….