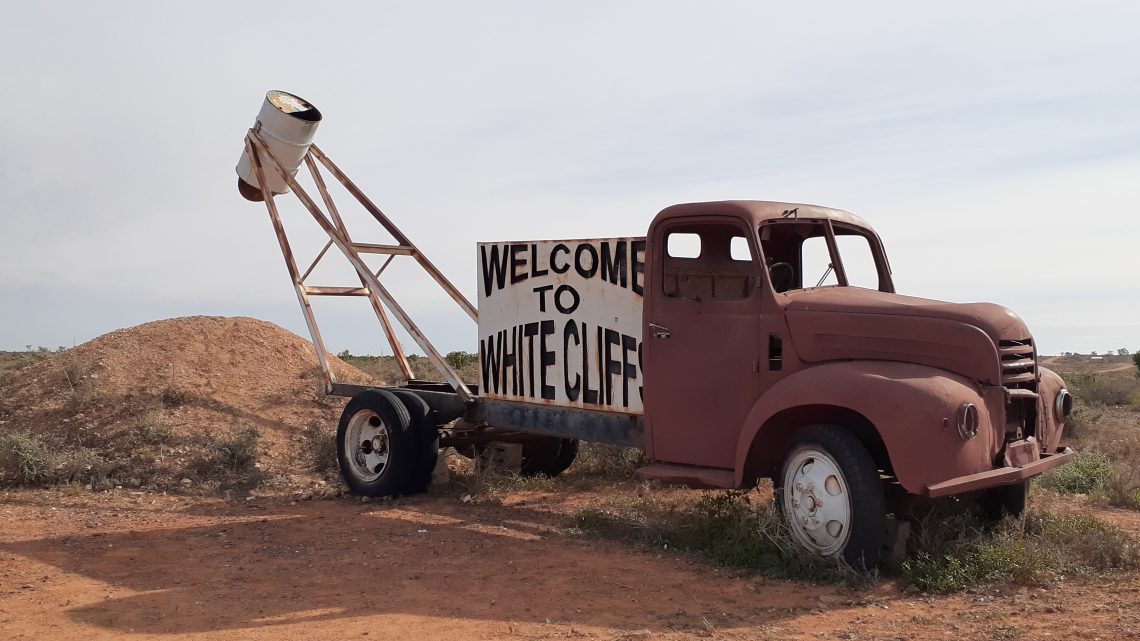 To be honest, I(Eve) just wanted to turn back the car and leave as soon as we arrived in White Cliffs. At first glimpse, the place was so bleak and appeared to have absolutely nothing other than rusty metal machinery here and there. Most of all, there was no spectacular white cliffs I expected but completely flat plains with small mounds of earth far away.

Unfortunately, Adam and I were forced to stay as we had accommodation in White Cliffs already booked for the night and couldn’t find any alternative accommodation available anywhere within a few hundred kilometres.

But White Cliffs turned out to be one of the most memorable places on our whole trip to outback. We just had to look beneath the surface.

White Cliffs is the first commercial opal mining field in outback NSW, Australia with the current population of about 100 to 200 people.

Opal mining here has started by a sheer chance. One day back in the 1880s, a couple of stockmen were out in the field hunting kangaroos when a horse kicked up a bright rock, which later turned out to be precious opal. As word got around, more and more people came to White Cliffs to try their luck and the town’s population blew out to as high as 3000 to 5000 at one stage.

White Cliffs is one of the few places in Australia where most of town is underground. The majority homes and businesses are dug into the hills so they are commonly called ‘dugouts’.

The temperatures here reach up to 50 °C above the ground in summer. Apparently, miners found great relief from heat in underground dugouts for mining and eventually began living in there. In dugouts, the natural temperatures remain at 16-26 °C all year round.

Best thing about living in dugouts is that you can dig out as many rooms as you like up to your boundary. If you need more rooms (when you have growing children or parents-in-law coming to stay), you can just dig out the earth and make more rooms. No mortgage and no building approval required. How cool is that!!!

White Cliffs is located in far west of outback NSW, about 1050 km (11.5 hours) from Sydney by the most direct road route. It is slightly closer to neighboring state capital cities: about 890 km (9.5 hours) from Melbourne and 760 km (8.5 hours) from Adelaide.

You can get all the relevant information, brochures and maps from the visitor center, which also serves as the general store and cafe/restaurant.

While driving around with a self-guided tour map, you can visit the opal field and galleries for free of charge. But Underground Motel, Dugout Home Tours and Opal Mine Tours require booking with some fees payable.

You don’t have many accommodation options in this little town so it it best to make a reservation well in advance. In particular, the White Cliffs Underground Motel is not only an accommodation but also a very popular tourists’ attraction itself and many tourists come to White Cliffs in order to experience staying at the dugout accommodation.

White Cliffs Underground Motel used to be a humble family home. A man decided to dig a house for his family. With no building code or permit required, he and hid son dug out 5 rooms and later joined them with son’s 3 bedroom residence next door, making it into an 8 room dugout. They didn’t stop there. They dug out 22 more rooms to make a total of 30 rooms.

When the nearby White Cliffs Hotel, then the only commercial accommodation in town, overflowed with guests, the family began offering visitors to sleep and share meals with them. As the demand for dugout accommodation continued to rise, the family home formally turned into a motel in 1989.

The temperature at the Underground Motel is constant 26 °C all year round. The rooms are clean, cozy and surprisingly spacious with high domed ceilings. Each room has a large shaft from the surface of the ground above to the ceiling for good ventilation and no two rooms are the same. Word of caution though. You have to be careful what you say, and how loud you get, as there are several small ventilation holes just above the door of each room.

The rooms’ furnishings are as basic as a monastery with no TV, fridge, kettle, wifi, heater or air conditioning system. And there is no en suite, which some people might find problematic. Guests are required to use a small number of communal showers/toilets next to the swimming pool outside.

We booked a room at the Underground Motel but canceled it at the last minute because we didn’t want to use the communal showers/toilets particularly at the time of COVID-19. So we just ended up having a little tour inside the Motel by ourselves, taking some photos.

Staying at the Underground Motel will definitely be a novelty and the highlight of a trip to White Cliffs if you don’t expect luxury.

White Cliffs Hotel is a very basic accommodation above the ground at the center of the town. The hotel has no charm but each room has an en-suite shower/toilet.

The left photo shows the pub/hotel’s original sandstone building. The accommodations are at the extended buildings behind it. The right photo is the building of a set of 4 Premium Double Rooms with a shared kitchen/lounge. We stayed in one of the rooms and found out the word ‘premium’ was quite exaggerated.

The Hotel cafe/restaurant offers food for lunch and dinner along with coffee and alcohol. The food here is surprisingly good, even though one man does everything from lighting up old fashioned kerosene heaters to cooking.

It is even better to have dinner and drinks while watching a beautiful sunset at the courtyard.

As soon as we arrived in White Cliffs, we had already made up our mind to leave the miserable place early the next morning.

Even after doing and seeing everything we could, we still had some spare time before dinner. Instead of staying in the equally miserable hotel room, we drove around without any particular aim and ended up at a village cemetery. I know what you are thinking: going to a cemetery out of all places? Any way, we were curious to find out what sort of people lived and died in White Cliffs.

That’s where we met a local opal miner named Peter, who invited us to his dugout home after a long friendly conversation. In the end, we changed our original plan and decided to visit him the next morning with a bottle of wine for him.

Peter came to White Cliffs with his wife back in 1974 to try his luck at the opal field and never left ever since. He is originally from Switzerland and has lived in Africa for some years where he met his wife, who is half African and half German. They raised three children at their dugout home. Now he is living alone as his wife and all his grownup children are living in big cities.

Peter was quite a character. He was witty and young at heart and loved music. To my surprise, he was a guitar and piano player and busker. He used to play music at clubs in the past and still did busking during the White Cliff’s annual festival.

Until I met him, I imagined opal miners would be dull miserable bunch digging holes in the dark underground like moles. But he quickly proved my preconceived image about them wrong.

It was immediately clear that Peter was a hoarder. Every nook and cranny of his dugout was crammed with junk he collected over time from the garbage dump. Even when we first met him at the cemetery, he said he was going to the garbage dump to check to see if he could find anything valuable.

Peter looked to be in his 70s but might be in his 80s or even 90s, given his wife was 88 years old. Yet unlike many people at that age, he was tech savvy and up-to-date with current trends. He had a Facebook account and bought groceries online. Apparently, a large supermarket chain in the nearest major town (about 300 km away) makes regular deliveries to White Cliffs once a week in summer and once a fortnight in winter.

Peter didn’t seem to think it was time to wind things down. He talked about couple of grand plans and dreams for the future. For example, building a huge observatory on his rooftop with stairs and a hatch window as well as digging out some more rooms at the block of land he bought just 2 years ago right next his current home.

Later on that day after saying goodbye to Peter, Adam and I went back to the opal field to fossick for our own opal and quickly learnt fossicking was seriously fun and highly addictive. It was like gambling. When we found one little piece of pebble with a slight bluish pigment, we became very excited and eager to search for more. We felt we might get lucky if we took one more step forward for one more look.

Now we could finally understand why many people came to this desolate place and continued digging day after day, year after year. The hope of hitting a jackpot with the next strike of the pick must have been irresistible. From that perspective, everything seemed to make sense to us.

Opal miners are big dreamers with grand plans for the future. In their mind, anything is possible. They just need a bit of luck. White Cliffs appears to have absolutely nothing at first glance but, in fact, holds sweet dreams and gleaming hopes for so many people. You just need to look hard to see it.

Hey, who knows? You might be lucky, too, only if you try.