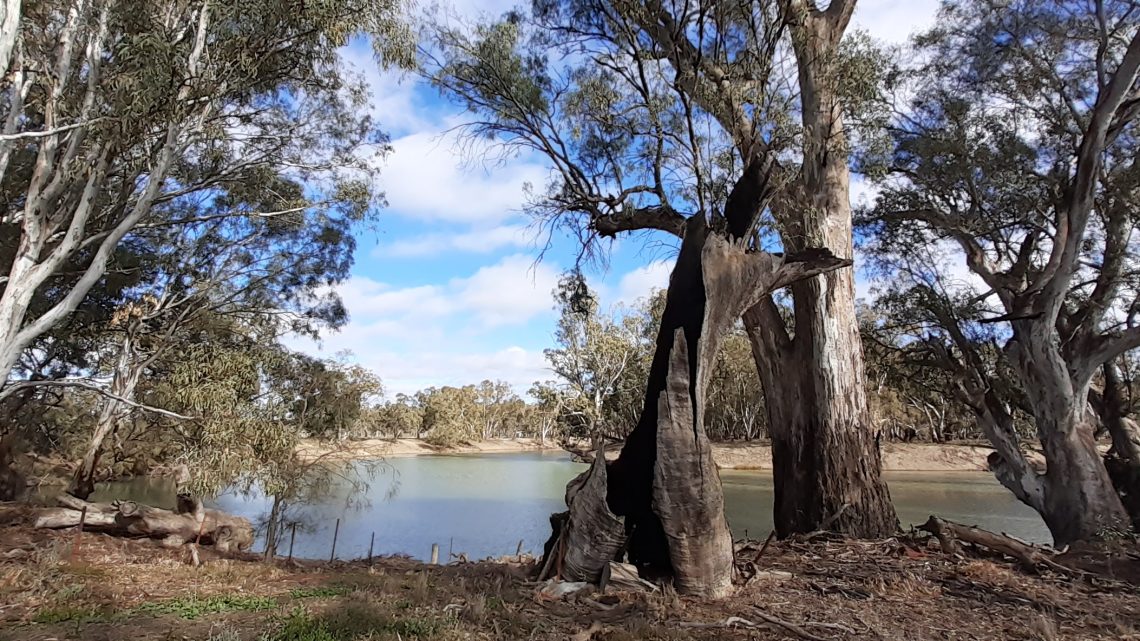 The tackier the sexier, we discovered in Balranald

I, Eve, have recently realized that I am drawn to people and their stories much more than places while travelling. Spectacular landscapes, glorious historic monuments and mouth watering food make travel a marvelous experience but all of those without human interactions with others feel like a big nothing burger to me and don’t seem to stick to my memory for too long.

Conversely, some places leave me with long lasting fond memories after unexpected encounters or silly incidents with people.

For example, Balranald is one of those places with nothing much to see or do but is where Adam and I ended up having a good time and came away with a fond memory.

Balranald is a tiny quiet outback town in NSW, Australia and has the remnants of the past as a once vibrant inland port city on the Murrumbidge River.

Balranald is one of the few towns you can base yourself in to travel to and from the famous Mungo Natioal Park.

The town itself is so small that you can walk from one end of the main street to the other end in just 5-10 minutes and probably need a couple of hours only to have a look around and do everything the town can offer.

The cheerful lady at the Information Center in town was very helpful and made our time in Balranald pleasurable. She opened the door – literally with a key – to the museum we didn’t even notice was there and made phone calls to make sure the town’s only art galley was open for us.

The museum has late 19 and early 20 century everyday items and tools as well as old official documents containing mainly business transactions in the area.

We found an Australian household manual called ‘Ladies’ Handbook of Home Treatment’ first published around 1905. It seemed to give us a glimpse into sex and marriage advice from the early 20 century, which intrigued us to find out how much our society’s ideas on these subjects have evolved since then.

I was thinking of asking if I could borrow the book from the museum but didn’t have courage to do so. Later on, I found out there were still several copies circulating on the online market and managed to buy a volume printed even earlier than the one the museum had. It was amazing to think that we can buy and sell a century old curio – never mind the value – on the internet.

The lady at the information center informed us that the art gallery is run by a bunch of old ladies, who sometimes forget to open it. So the middle aged info lady often had to call the gallery ladies to remind them to open it but got tired of doing so and lately has given up. But she did contact the gallery ladies on our visit to make sure it was open for us.

When Adam and I swung by the gallery after the museum, I expected to see a lethargic old woman in her 70s whose memory is fast fading. But I found one of the presumably forgetful ladies who was there on that day was stylish, vibrant and far from being old, probably in her 50s. – Someone in their 50s is still young, right? – From the looks of it, the ladies in this town call each other ‘old’.

There are not that many eateries in this little town and the only proper and decent cafe is located right next to the information center. The cafe offers light meals for breakfast and lunch as well as coffee and cake. We had coffee and a piece of cheese cake that we found to be sublime.

Just outside of Balranald is Yanga National Park. We don’t know what it normally looks like in good times but when we went there it was in a sad state with its lakes dried up, vehicle tracks closed and a small body of unwelcoming grayish green water running in the river.

We drove around the national park, looking for a nice place in vain. In the end, Adam picked up a scull of a dead emu we came across by the side of the road and brought it with us as a souvenir.

We booked three nights at a motel in Balranald on the highway, which goes slap bang through the middle of the town. The motel looked the most decent in photos out of the only three accommodations advertised online.

When we checked in the motel on the second day of our trip to the outback, we were given a room right next to the road with one of our bedroom walls functioning as the fence of the motel property.

Concerned about noise from the passing trucks on the highway and passing people on the footpath, I asked Adam if he could request a room away from the main road. But he assured me it should be okay as the walls were pretty thick. Even though I wasn’t very convinced, I didn’t say anything further because I didn’t want to be difficult for him.

After early dinner, we were about to settle in the room for the night. Suddenly a great hullabaloo erupted outside when a mob of young men split out of the restaurant/gaming club across the car park of our motel. It sounded like they had some drinks presumably on their first opportunity after three-month-long lockdown.

We could hear them walking closer to our room. Then, someone banged our bedroom door.

In a lightening speed, Adam ran across the room and flung the door open to find no one. Quickly closing the door behind, he went further out to the front yard/car park and shouted at the drunken men, “what do you want? Why do you bang the door, eh?”

I got alarmed by his sudden outburst. Standing behind the closed door, I couldn’t see what was happening outside but soon the hubbub of the drunkards ebbed away and Adam returned to our room.

He then called the motel reception and demanded a better room, explaining what just happened. Unfortunately, his demand couldn’t be met as the motel was fully occupied, and we had to resign ourselves to three nights of potentially disturbed sleep.

Lying in bed with Adam, I was thinking of a short film style music video of Enrique Iglesias’ 2001 single ‘Hero’, in which two fugitive lovers – Enrique and sexy Jennifer Love Hewitt – have sweaty, no air-conditioned, desert motel sex on the pile of stolen money while running away from mobsters.

“Making love in a cheap motel is quite sexy in music videos or movies,” I said.

I asked,”Is this tacky enough for you?”

“No, It could be tackier,” he answered.

“How about making love in every motel room we stay during our trip,” I suggested and he agreed (The semi arid outback NSW bears some resemblance to the mostly barren desert the video takes place in).

All of a sudden, staying in a tacky motel room felt like a very sexy thing to do and we both could look forward to the prospect of staying even tackier motel than the current one.

I can’t say what happened after. But what I can say is we had fun. What I also can say is the best part of travel is not only to see wonderful places but also to create my own stories and make memories.